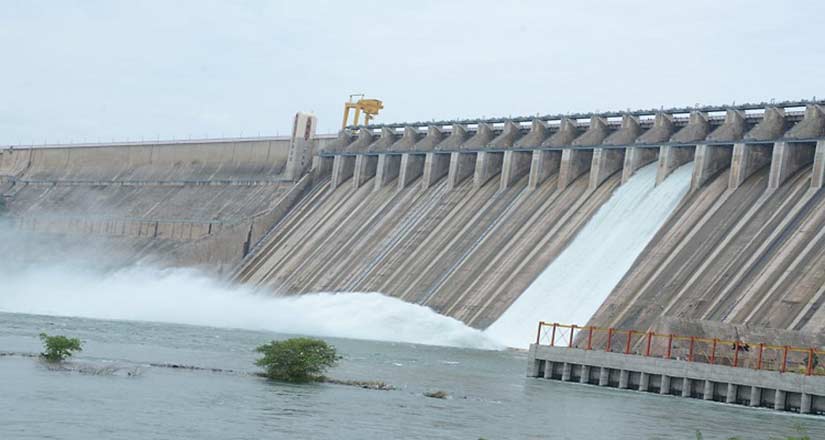 The dam has a storage capacity of nearly 11,472 million cubic meters with an irrigation capacity for 10 acres of land. The dam measure 150m tall and 16 kms in length while also being a major tourist attraction. It is among the first irrigation projects started by the Indian Government as an element of the Green Revolution.

A lake has been built behind the dam, which is one of the largest man-made lakes in the world. With beautifully landscaped gardens surrounding it, the lake makes for an ideal picnic spot in winter. It is also a popular site for boating. A little ahead is Nagarjunakonda, a small hillock and island (from which the dam draws its name) with a Buddhist museum, which has exhibits dating back to the 3rd century. Just 22 km from  Nagarjunakonda are the Ethipothala Waterfalls and Srisailam Wildlife Reserve. Nagarjuna Sagar dam is designed and constructed to use all the water impounded in its reservoir of 312 TMC gross storage capacity which is the second biggest water reservoir in India. The Nizam made the British engineers begin the survey work for this dam across the Krishna river in the year 1903. But the project construction was officially inaugurated by Prime Minister Jawaharlal Nehru on 10 December 1955 and proceeded for the next twelve years. Raja Vasireddy Ramagopala Krishna Maheswara Prasad, popularly known as late Muktyala Raja was instrumental in the construction of the Nagarjuna Sagar Dam via active political lobbying, a donation of one hundred million British pounds and fifty-five thousand acres of land.

It was the tallest masonry dam in the world at that time, built entirely with local know-how under the able engineering leadership of Kanuri Lakshmana Rao the then Member of Parliament from Vijayawada.